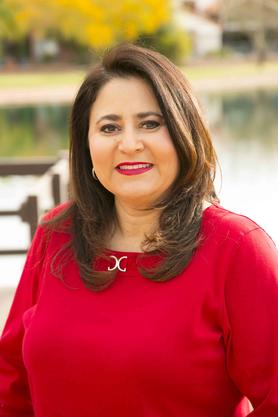 Chairwoman of the Arizona Corporation Commission and former President/CEO of the Tucson Hispanic Chamber of Commerce.

She ran for Congress in Arizona Congressional District 2 in 2018 and won a competitive primary race. During her campaign she was endorsed by Governor Ducey, Senator Kyl, Congressman Kolbe and many local elected leaders. Though the general election results were disappointing, she enjoyed meeting thousands of people in the region and tackling many key issues impacting Arizona.

Lea was appointed by Governor Doug Ducey to co-chair the Arizona Zanjeros (2015 - 2017), a business leadership group formed to ensure the state continues to flourish economically by driving business growth and promoting Arizona’s extraordinary assets. She was selected to serve on Governor Doug Ducey’s Transition Team in 2014 and co-chaired the subcommittee on Economic Development, Entrepreneurship and Trade. She has also been appointed to serve on the Arizona Judicial Council which advises the Arizona Supreme Court, and the Arizona Finance Authority, the state's bonding authority.

She currently chairs the board of directors for Tenet-owned St Joseph's and St Mary’s Hospitals and is the Chair of the SBA's national Small Business Development Council. She is the President of the National Association of Women Business Owners in the greater Tucson area.

She formerly served on the Boards of the United States Hispanic Chamber, the Arizona Chamber of Commerce and Industry, and the University of Arizona Foundation. She formally served as the Chairwoman of the Southern Arizona Business Roundtable, the Past Chair of the Southern Arizona Chamber of Commerce Alliance, the Founder and Past Chair of the Pima County Small Business Commission, and as the Chairwoman of the University of Arizona Hispanic Advisory Council.  She was appointed by the Obama Administration to the National Women’s Business Council where she served for three years.

Lea was recognized as a 2021 Most Influential Women in Arizona Business Award by AZ Big Media and received the 2021 Jack Jewett Award by Arizona Center for Civic Leadership. She was inducted into her high school alma mater Sabino High School's Hall of Fame in 2021. Additionally, she was recognized by the National Football League with a 2015 Hispanic Heritage Award by the Arizona Cardinals, the University of Arizona Eller College with a 2014 Extraordinary Woman in Business award, the University of Arizona Alumni Association with the 2012 Distinguished Citizen Award, the 2011 State of Arizona Minority Business Advocate of the Year, the 2009 Rising Star by the Hispanic Professional Action Committee, the 2008 Business Advocate of the Year by MED Week, a 2007 Woman of Influence by Inside Tucson Business, was recognized as a 40 under 40 recipient and honored with a University of Arizona Entrepreneurial Fellow award. In addition, she is a Flinn Brown Fellow and an Honorary Rotarian.

She received her undergraduate degrees in Marketing and Entrepreneurship from the University of Arizona, and her Masters in Business Administration from Pepperdine University. She is married with two children.